Bellator returns to Canada for Bellator 79 on November 2nd

The Bellator Fighting Championships will be returning to Canada during the seventh season as Bellator 79 takes place from Casino Rama. 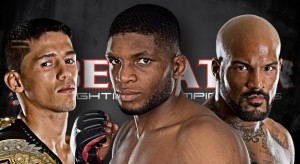 This will be the fourth time that Bellator heads to Casino Rama and the fight card will feature bantamweight champion Eduardo Dantas, Paul Daley and Ryan Ford.

Tickets are currently on sale at Ticketmaster.com, Bellator.com and in person at the Casino Rama Box Office and ticket prices range from $25-$175.

“From Michael Chandler’s vicious knockout of MMA legend Akihiro Gono to Douglas Lima’s brutal finish over Ben Saunders, we’ve seen some tremendous fights at Casino Rama, and I expect the same on November 2,” said Bellator Chairman & CEO Bjorn Rebney. “Our fans in Ontario have always been top notch, and they are for another great night with names like Eduardo Dantas, Paul Daley and Ryan ‘The Real Deal’ Ford.”

Dantas (14-2) won the season five bantamweight tournament and defeated Zack Makovsky by arm triangle choke submission at Bellator 65 to become the second ever Bellator bantamweight champion. He is currently on a seven fight winning streak, with five of those wins coming by knockout or submission.

He is waiting to find out who his opponent will be as the season six bantamweight tournament final is this Friday night at Bellator 73 as Luis Nogueira meets Marcos Galvao.

Daley (30-12-2) made his Bellator debut last month at Bellator 72 and will have one more fight before entering the welterweight tournament at the beginning of 2013. His opponent for this fight card was not announced in today’s press release and his opponent should be announced in the next couple of weeks.

Stay tuned to TheMMAReport.com for updates on this upcoming Bellator fight card.