With UFC 151 being cancelled today by the UFC, the brass at the UFC has been figuring out where to schedule fights that were booked for next weekends card. 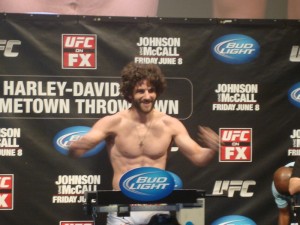 The first fight next Saturday night was scheduled to be a welterweight bout with Charlie Brenneman meeting Kyle Noke.

The UFC has announced that this fight will now take place on September 22nd in Toronto at UFC 152.

Also, the UFC has announced that Dan Miller has been forced off the card with an injury and they are looking for a new opponent for Sean Pierson.

UFC 152 takes place from the Air Canada Centre in Toronto and will be headlined by Jon Jones defending the UFC light heavyweight title against former champion Lyoto Machida.

The current UFC 152 fight card is below and stay tuned to TheMMAReport.com for updates on this fight card and the fallout of UFC 151.