The UFC will be heading back to Seattle in December for UFC on FOX 5 and the organization has announced a trio of bouts, which includes recent Ultimate Fighter winner Michael Chiesa. 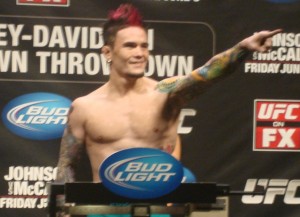 This will be Chiesa’s first bout since winning the reality show in June and will face Rafaello Oliveira.

All of these fight announcements where made on the UFC website and they will all likely take place on the preliminary card.

Chiesa (8-0) won season 15 of “The Ultimate Fighter” earlier this year with a submission victory over Al Iaquinta at the finale in June and six of his eight career victories are by submission. Oliveira (15-5) entered the UFC last year and lost his first two fights in the organization and earned his first UFC victory earlier this year against Yoislandy Izquierdo at UFC 148.

Siver (20-8) and Yagin (16-5-1) were scheduled to meet at UFC 151, but the card was canceled last week. The two fighters will now meet at UFC on FOX 5 with both fighters entering the fight with a win as Yagin recently defeated Mark Hominick and Siver defeating Diego Nunes.

UFC on FOX 5 takes place on December 8th from Seattle’s KeyArena and will be headlined by Benson Henderson defending the UFC lightweight title against Nate Diaz.