Bellator 79 Results: Richard Hale stops Thiago Santos in the first round to advance to tournament final

The seventh season of the Bellator Fighting Championships continued on Friday night at Casino Rama in Canada for Bellator 79 and Richard Hale and Shahbulat Shamhalaev both scored first round victories to advance to the finals of their divisions tournament. 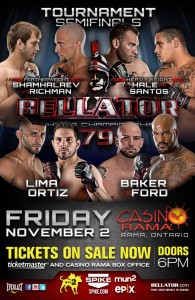 Hale (21-4-1) got rocked earlier in the first round against Thiago Santos but was able to weather the storm and survive the strikes and submission attempts of his opponent.

Hale now advances to the final and will wait to see what happens next week in the other semifinal bout which will see Vinicius Queiroz take on Alexander Volkov.

In the other semifinal tournament fight tonight, Shamhalaev (11-1-1) defeated Mike Richman by knockout in the first round and only needed 1:45 to get the victory. Shamhalaev landed a counter right hand that dropped Richman (13-2) and landed multiple strikes on the ground before referee Yves Lavigne came in to stop the fight.

This is the sixth career victory by knockout for Shamhalaev and he will wait to see what happens next week at Bellator 80 when Rad Martinez takes on Wagnney Fabiano in the other featherweight tournament semifinal.

The full Bellator 79 results are below: