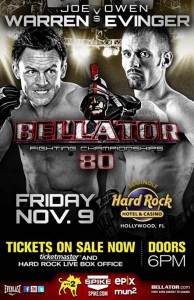 The weigh-in’s for tomorrow night’s fight card took place on Thursday afternoon and all of the eight fighters on the main card were on weight.

In the main event, former Bellator featherweight champion Joe Warren (135.6) will look to snap a two fight losing streak when he faces Owen Evinger (135.2) in a bantamweight bout.

The only fighters that were not on weight were preliminary card fighters Sky Moiseichik and Shannon Slack. They were scheduled to compete in a featherweight bout, but Moiseichik missed weight by .4 pounds and Slack was overweight by 3.2 pounds. With both fighters missing weight, the bout will now be a 150 pound catchweight bout.

The full Bellator 80 results are below: