The UFC has added a welterweight bout to the UFC 156 card on February 2nd with Erick Silva facing Jay Hieron. 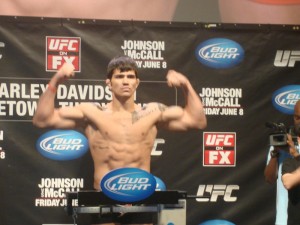 UFC officials announced the fight booking on Wednesday afternoon and it’s unknown if the fight will make the main card broadcast on pay-per-view or if it will be on the preliminary card.

Silva (14-3, 1NC) has gone 2-2 in the UFC, but one of those losses was a disqualification because of illegal strikes to the back of the head to Carlo Prater at UFC 142.

He is coming off a lost to Jon Fitch at UFC 153, which he lost by decision and he won the fight of the night bonus. It was his second straight fight that he has won a fight night bonus and it one of the top prospects in the UFC welterweight division.

Hieron (23-6) recently returned to the UFC and was defeated by Jake Ellenberger by decision at UFC on FX 5 in October. He has gone 11-2 in his last 13 fights, which includes him winning the season four Bellator welterweight tournament.

UFC 156 takes place on February 2nd from the Mandalay Bay Events Center and will be headlined by Jose Aldo defending his UFC featherweight title against former lightweight champion Frankie Edgar.