The seventh season of the Bellator Fighting Championships concluded Friday night with Bellator 84 from the The Venue at Horseshoe Casino in Hammond, Indiana. 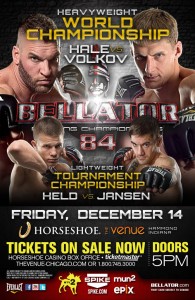 The night was extremely similar to last week as we started off with some confusing news that came out during the preliminary card on Spike.com.

Lightweight tournament finalist Marcin Held was denied admittance by the Casino as he was under 21 years old. As a result, the commission and Bellator had to pull him off the card. According to Dave Jansen himself, he got paid show money but was clearly aggravated with the nights dealings. Bellator looks to be lining this fight up for sometime in the early spring of season eight when they debut on SpikeTV.

In the nights main-event, Alexander Volkov circled-and-countered his way to a dominating unanimous decision victory over Rich Hale to win the heavyweight tournament and the vacant Bellator heavyweight world championship.

In what was built as a match up that was going to end quickly ended up lasting the entire 25 minutes. From the first round onward it was clear was Volkov’s game-plan was and that was to circle-and-counter as much as possible. This was more than evident in the first round.  As the two wore through the first round Hale kept trying to cut off Volkov’s angles but kept getting frustrated and pushed into the cage. Hale did surprise Volkov near the end of the round with a nice hook that scored him a flash knockdown. It was not enough to finish Volkov as the round ended.

The rest of the fight was a carbon copy with the exception of the flash knockdown from the first. In rounds two and three Hale was really unable to mount any type of offensive consistency. By the start of the third round, Hale’s corner was heard yelling at Hale to “finish this fight brutally.” The finishing and the brutally never came though as Volkov kept counter moving and by the third round started incorporating a series of high-kicks that Hale kept eating but eventually got swollen and cut.

The championship rounds were no different than the previous two. Hale would come out of the opening bells the aggressor but quickly be stifled with Volkov’s game-plan of circling-and-countering. Hale’s only real offense of the last two rounds was when he came out swinging with some heavy 1-2 combinations to open the final round but Volkov was patient and weathered the storm for a unanimous decision victory, the $100,000 check and the vacant Bellator heavyweight world Championship.

In other action, we saw a rematch of Felice Herrig and Patricia Vidonic. The two previously fought in April at the XFC which saw Herrig winning via unanimous decision.  This fight was once again a carbon-copy of the last fight. Herrig was just the better fighter in all aspect of the game. Every round was basically the same – Vidonic would come take the center of the cage, Herrig would land some kicks, Vidonic would look to clinch and Herrig would then take Vidonic down. Rinse-and-repeat and that was this entire fight.

Vidonic did have one single sign of life in the end of the third round. During a scuffle on the ground Herrig was swept and Vidonic landed in full-guard. From there Vidonic was unable to muster any offense as Herrig’s guard was too strong. The referee then forced the two up and the Herrig finished the fight off with a clean leg-trip and side-control. The unanimous decision victory moved Felice Herrig up to 8-4 and she is looking for a step-up in competition next.

In other main card action we had Jack Hermansson putting his undefeated record on-the-line against Daniel Vizcaya. Both fighters were so evenly matched that each round you could have argued for either fighter. It should be noted though that, this fight truly showcased both fighters submission grappling skills and ability to take damage. In the end, Daniel Vizcaya left the building with a split decision victory and Jack Hermansson with his first notch in the loss column.

The night also started out with a solid performance by Louis Taylor has he dominated Joe Vedepo. The two fighters started the fight was some dirty-boxing against the cage that saw Taylor’s glove get knocked loose. After a quick stoppage, Taylor came in for a quick take-down and was working some striking from the half-guard position. As Taylor looked for more separation Vedepo dropped his hands and as hit with a clean straight that put him to sleep via KO at the 4:12 mark of the first.