An injury has forced Thiago Perpetuo to pull out of his UFC on FX 7 bout against Michael Kuiper will now face Caio Magalhaes on the January 19th card in Brazil. 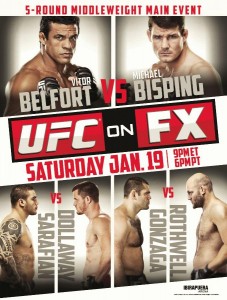 UFC officials announced the change on Saturday and the fight will take place on the preliminary portion of the card.

Magalhaes (5-1) made his UFC debut earlier this year after winning his first five fights. His UFC debut came at UFC on FX 3 against Buddy Roberts and he was defeated by unanimous decision.

Prior to making his UFC debut, he had finished his opponent in three of his five fights, with two of the wins coming by submission.

Kuiper (12-1) opened his career with 11 straight victories before making his UFC debut at the beginning of this year. He lost his UFC debut against Rafael Natal be decision and scored his first UFC victory at UFC 150 against Jared Hamman.

UFC on FX 7 takes place from the Ginasio Estadual Geraldo Jose de Almeida in Sao Paulo, Brazil and will be headlined by Vitor Belfort meeting Michael Bisping in a five round middleweight bout.