Bellator officially announced details of its Bellator 95 season eight close-out fight card today which will take place on April 4th from Ovation Hall at Revel in Atlantic City, NJ and live on SpikeTV. 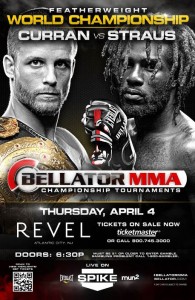 The card is headlines by a featherweight world title fight between champion Pat Curran and Daniel Straus. Curran is coming off of a dominant win over Patricio Pitbull at Bellator 85 (SpikeTV debut) and Straus is coming off a submission victory over Alving Robinson back at Bellator 78.

The fight card will also feature the return of Tiger Schulmann products Lyman Good and Munah Holland.  Lyman will be squaring off against Dante Rivera and Holland will be facing off against Jessica “Evil” Eye.  New Jersey fan favorite Tom Deblass will also be in the cage to round off an incredible card.

Tickets go on sale Friday, February 8th at 10 a.m. at all Ticketmaster locations, online at Ticketmaster.com and by calling 800-745-3000. The main card will broadcast on Spike TV at 10 p.m. ET, as well as in Spanish language on mun2. The preliminary card will be streamed LIVE and FREE on Spike.com, with doors to event opening at 6:30pm EST.

“We’re incredibly excited to be able to bring Bellator MMA to a world class venue like Revel,” said Bellator Chairman & CEO Bjorn Rebney. “This fight card is going to be a great way to close out our first season on Spike TV and I couldn’t think of a better place to host it than a classic fight town like Atlantic City.”