This past Saturday night, in primetime, Spike TV offered up Bellator 98 to open season nine and the road to the November PPV. 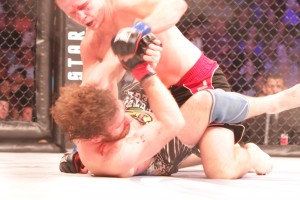 The overall peak number landed at 663k total viewers and the 10:45 – 11:15 (partial over run) timeframe hit 595k total viewers all during the Shlemenko/Cooper main event.

Just for comparison purposes, the last UFC event on a Saturday in the same time-slot, was the first event on FS1 which garnered over 1.7 million people. Since then on two consecutive Wednesday’s, the UFC has failed to reach a million viewers landing at 809k and 539k total viewers.

When it came to the competition, Bellator was up against Nascar on ABC, Oklahoma versus West Virginia on Fox and one tough College Football game in Notre Dame versus Michigan on ESPN which dominated the night.

The Notre Dame versus Michigan on ESPN drew over 7 million viewers and an enormous 5.6 rating that tied for the highest rated game between the two since 2003. Notre Dame versus Michigan last year on NBC pulled a 6.02 million viewers live with a 4.8 rating. Not to mention, it went head-to-head against ABC and Fox who offered up Clemson at Florida State and Kansas State at Oklahoma and beat both of them by a large margin.

Safe to say, College Football did Bellator in on Saturday night, so the question now comes, how does Bellator bounce back this upcoming Friday at 9PM EST on Spike TV.