It was nearly one week ago that we learned that the Bellator 131 main card on Spike TV average 1.2 million viewers and the main event bout between Tito Ortiz and Stephan Bonnar averaged 1.8 million viewers with a peak of over 2 million. 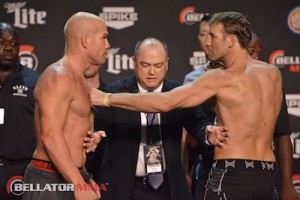 The viewership marked the biggest audience in Bellator history, topping last year’s Bellator 106, which drew an average of 1.1 million viewers.

In 2014, it was the first time a Bellator event averaged over 1 million viewers and was the seventh time this year that the peak in the preliminary ratings (Live+SD) had at least 1 million viewers.

After getting the ratings, it made me think. What is the state of MMA in terms of ratings right now? What kind of fights are bringing people to the television? Do organizations like Bellator and the UFC have to promote fights like Ortiz/Bonnar to get the big ratings they are starving for?

Let’s start off by looking at Bellator’s television ratings on Spike TV in 2014. During season ten, the cards that drew a peak of over 1 million in the preliminary ratings were 110 (Rampage/M’Pumbu), 112 (Curran/Straus), 115 (Minakov/Kongo), and 118 (Warren/Silva). In the recently completed season eleven, the cards to achieve at least a peak of 1 million were 124 (Newton/Beltran), 125 (Manhoef/Marshall), and 131 (Ortiz/Bonnar).

Fox Sports 1 launched on August 17, 2013 and the debut featured a majority of UFC content including UFC Fight Night 26: Sonnen vs. Shogun. That fight card is currently the biggest viewership for a UFC Fight Night event on Fox Sports 1 with an average audience of 1.7 million and a peak of 2.2 million.

Since the debut of Fox Sports 1, UFC Fight Night cards on the network are averaging 812k, 19 percent more than Bellator’s average of 685k over this time period. The UFC having a better average over Bellator should not come as a surprise to anyone, but is the new vision of Bellator a treat to narrowing that gap?

Of course, it can be said that the new era of Bellator did not begin until Bellator 131. Coker has talked about making big fights in the promotion and the Bellator 131 card had some of his biggest names including Ortiz, Bonnar, and Muhammed “King Mo” Lawal. All of the fights on the Bellator 131 card averaged at least 1.1 million viewers, including a preliminary bout that was re-aired during the main card.

First off, I think it’s tremendous that Bellator was able to get the amount of viewers that they received just over 1 week ago. However, a fight like Ortiz/Bonnar can get 1.8 million viewers, while a fight between top UFC lightweights Benson Henderson and Rafael Dos Anjos at UFC Fight Night 49 (August 23, 2014) only averaged 699k in the preliminary ratings while the peak for the event was 962k.

On cable in 2014, Ortiz/Bonnar is the largest viewership, with the second largest being UFC Fight Night 36 in February. Should the UFC consider doing more “fun” fights in 2015 to draw more viewers, like what Coker booked for Bellator 131?

It’s unlikely, but the data shows what kind of fights fans are looking for now. They want to see fights that have big names and fights that will likely end in a knockout (Melvin Manhoef vs. Joe Schilling).

As someone who runs a mixed martial arts news website, I want to see the UFC, Bellator, WSOF, and other promotions break television records for the sport every week. However, I do wonder if we are currently just in a period of the sport that fans are tired of the amount of cards or if the sport is actually in a decline.