Bellator will return Friday night as the promotion will be at the Scottrade Center in St. Louis, Missouri and the event will be headlined by a heavyweight bout as Kimbo Slice and Ken Shamrock settle their unfinished business. 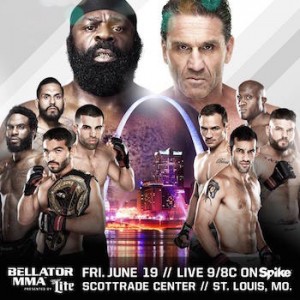 Along with the heavyweight main event, the main card on Spike TV see a title fight as Patricio “Pitbull” Freire will defend the featherweight title against season ten tournament winner Daniel Weichel.

Check out a breakdown of the five fights that will be on the main card broadcast on Spike TV on Friday night.

Kimbo Slice (4-2) vs. Ken Shamrock (28-15-2)
When Slice steps into the Bellator cage on Friday night, it will have been 1868 days ago that his last MMA fight took place (UFC 113 vs. Matt Mitrione) and 2449 days since he was initially scheduled to face Ken Shamrock at Elite XC: Heat. He will be looking for his fifth MMA win and his last MMA win came in 2009 against Houston Alexander.

Just like Slice, it has been a long time since we have seen Shamrock step into a MMA cage. His last MMA fight came 1667 days ago when he lost to Mike Bourke by TKO due to suffering a leg injury in the fight and he is 2-2 in his last four MMA fights.

Patricio Pitbull (23-2) vs. Daniel Weichel (35-8)
Pitbull became the Bellator featherweight champion last year when he defeated Pat Curran by unanimous decision at Bellator 123. He is coming off a successful title defense in January against former champion Daniel Straus and he will be looking for his seventh straight win.

Weichel entered Bellator last year and was immediately placed into the Season Ten Featherweight Tournament. He would score victories over Scott Cleve, Matt Bessette, and Desmond Green to win that tournament to secure a title shot in the 145 pound division.

Bobby Lashley (12-2) vs. Dan Charles (9-2)
Lashley is returning from injury and was initially scheduled to face James Thompson in a rematch. However, Thompson pulled out of the bout with an injury and Lashley will be looking to improve to 3-0 in Bellator against Charles.

Charles initially made his Bellator debut in 2013 and dropped his debut against Mighty Mo. After losing a fight outside of the promotion, he returned last year and he has won back to back fights in the Bellator cage.

Daniel Straus (23-6) vs. Henry Corrales (12-0)
Straus enters Bellator 138 following a submission defeat in January to Pitbull and he is 1-2 in his last three fights. He is one of the most successful featherweights in Bellator history and a win over Corrales will put him right back in the mix for another shot at the title.

Corrales was signed by Bellator earlier this year after being a champion in the King of the Cage promotion. His last four victories have come by stoppage and his last win came in March against Aaron Neveu.

Michael Chandler (12-3) vs. Derek Campos (15-4)
For the first time since 2012, Chandler will be stepping into the cage for a scheduled three round bout. His last five fights have been title fights and he will be looking to snap a three fight losing streak against Campos.

Campos enters this fight with six wins in his last seven fights and his last four wins have come in Bellator. His most recent fight came in September as he defeated Estevan Payan by knockout at Bellator 126.

The current Bellator 138: Unfinished Business fight card is below.