Bellator 138 took place this past Friday night in St. Louis, Missouri and was headlined by Kimbo Slice weathering an early storm to defeat Ken Shamrock by TKO in the first round. 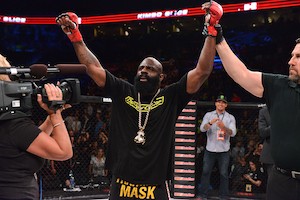 In addition to the main event, the fight card saw a title fight as Patricio “Pitbull” Freire retained the Bellator featherweight title with a knockout victory in the second round against Daniel Weichel.

Kimbo Slice:
Friday night was the return to MMA for Slice and he scored his first victory since 2009 in a MMA cage. Heading into the fight, I wondered if Kimbo was still a major needle mover and there is no question about it, the man still moves the needle. He stated at post fight press conference he wants to continue to fight and Bellator should find someone that will stand with him.

Ken Shamrock:
With the defeat against Slice on Friday night, Shamrock is now 2-9 in his last eleven fights and all of those defeats have come by TKO. This was his first fight since 2010 and at his age, it’s time for Shamrock to hang up his gloves.

Patricio Pitbull:
For a brief moment, it looked like Pitbull was going to drop the featherweight title against Weichel. However, he would be saved by the bell and ended up finishing the fight in the second round to win his seventh straight fight. If Georgi Karakhanyan was healthy, he would be the obvious choice for Pitbull’s next fight, but he tore his ACL in late April.

Daniel Weichel:
Weichel was just seconds away from becoming the Bellator featherweight champion, but the bell was not his friend. The defeat snaps a seven fight winning streak and he will have to work his way back to a title shot. If he can put together another two or three wins, he will be right back in line for another shot at the title.

Bobby Lashley:
Lashley is now 3-0 in Bellator following his dominating win against Dan Charles. With the Bellator heavyweight title picture a little cloudy at this point, there are several ways Bellator can go with him.

Dan Charles:
Charles stepped up on short notice to face Lashley and he was unable to get any offense going in the fight. In fact, he would only land five total strikes in the fight and the defeat snaps a two fight winning streak.

Daniel Straus:
The former Bellator champion wanted to make a statement, which he did. He dominated Henry Corrales in the opening round of their featherweight bout and scored the finish in the second round. As I mentioned with Pitbull, due to the injury to Karakhanyan, Straus is the best choice for the next title shot.

Henry Corrales:
This is the first defeat for Corrales in his Bellator career and Friday night also marked his debut in Bellator. In the fight with Straus, he showed a tremendous chin and proved why many people in Bellator are very high on him.

Michael Chandler:
Chandler snapped a three fight losing streak with a submission win over Derek Campos. It was his first victory since the summer of 2013 and the victory proved that he is still one of the best lightweights in Bellator.

Derek Campos:
Campos has now dropped two of his last three fights and both of those defeats have come by stoppage. Chandler was just too much for him on Friday night and I expect you will see Campos back in the Bellator cage in the fall.