The main event of UFC 191 on September 5 is now official and it will be a title fight as flyweight champion Demetrious Johnson defends the title against John Dodson in a rematch of their 2013 bout that Johnson won by decision. 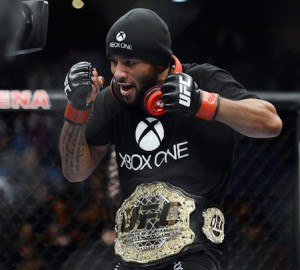 The fight booking was announced by the UFC during the main card broadcast of UFC Fight Night 71.

In addition to announcing the main event of UFC 191, the promotion has also announced Anthony Johnson vs. Jan Blachowicz and Francisco Rivera vs. John Lineker will take place on the card coming from the MGM Grand Garden Arena.

The first meeting between Johnson and Dodson came at the beginning of 2013 and Johnson won by unanimous decision. Since their first meeting, both fighters are undefeated and Johnson has made five successful title defenses.