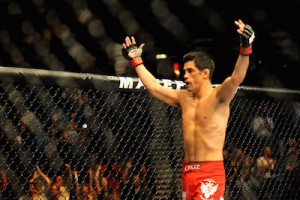 Following the victory over Mizugaki, UFC President Dana White stated that Cruz would be fighting for the UFC bantamweight title next. However, Cruz suffered another knee injury in December and has been recovering from that injury.

During the most recent edition of Inside MMA on AXS TV, Cruz talked about his timetable on returning to the cage and how he plans to fight for the title when he comes back.

“My goal is to try to be back by the end of the year,” Cruz said. “That is my goal. I’ve already had my title stripped. I have already been dropped out of the rankings. What do I need to rush for is my thinking right now. Everything that I have earned has been taken from me.”

“I want to go out into this next fight very healthy and I definitely want to fight for the title,” Cruz continued. “I do not care who has it. I believe I am the best in the world. I believe I never lost that position. So now, the only thing we are waiting for is for me to come back and earn it.”