UFC on FOX 16 took place this past Saturday night at the United Center in Chicago, Illinois and was headlined by T.J. Dillashaw retaining the UFC bantamweight title with a TKO victory over Renan Barao in the fourth round. 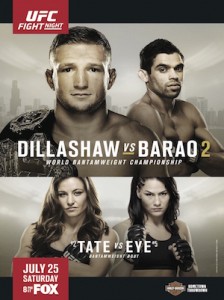 Prior to the main card, the televised preliminary card aired on FOX with four fights and featured Tom Lawlor defeating Gian Villante by knockout in a light heavyweight bout. When it came to the average viewership, the broadcast had an average of 1.3 million viewers.

With the finalized numbers, UFC on FOX 16 powered FOX to place first for the night in primetime among the broadcast networks across key demos including Men 18-49 and Adults 18-49. In addition, the main card viewership was up 13 percent from last year’s July UFC on FOX event (2.5 million viewers) and the fight card was the top-ranked sports event on Saturday.