A new middleweight champion was crowned on Friday night at the Mohegan Sun Arena in Uncasville, Connecticut as Rafael Carvalho upset Brandon Halsey to claim the Bellator title in the main event of Bellator 144. 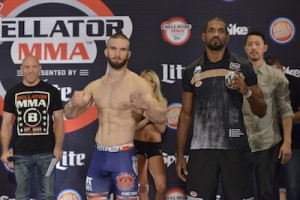 In the opening round, Halsey was able to score a quick takedown and appeared on his way to a submission victory. He locked in an arm-triangle choke and while it looked deep, Carvalho was able to survive and make it out of the first round.

The end of the fight would come at the 1:42 mark of the second round as Carvalho landed a liver shot and Halsey would immediately drop to the mat. Carvalho would land a strike on the ground before referee Dan Miragliotta came in to stop the fight.

“I want to thank my team for everything,” Carvalho said. “I have believed in myself from the beginning and I knew this time would come.”