Road To Bellator 145: With A Vengeance

Bellator 145 will take place next Friday night at the Scottrade Center in St. Louis, Missouri and the event will feature title fights in the featherweight and lightweight divisions. 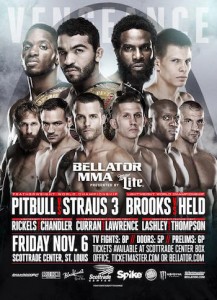 Get ready for the event by watching part one of “Road To Bellator 145: With A Vengeance,” which goes behind the scenes of the fighters preparing for their upcoming fights.

In addition to giving an inside look into the fighters camp, the show has never-before-seen footage of Pat Curran’s painful training injury that kept him off the card.

Bellator: With A Vengeance | November 6, 9/8c Live on Spike