World Series of Fighting 24 will take place on Friday at the Foxwoods Resort Casino in Mashantucket, Connecticut and the card will be headlined by a title eliminator fight in the welterweight division as Jon Fitch meets Yushin Okami. 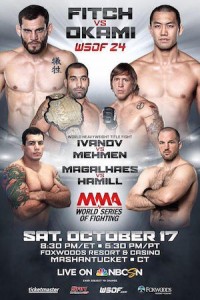 The card will also see heavyweight champion Blagoy Ivanov make his first heavyweight title defense as he is challenged by Derrick Mehmen in the co-main event of the fight card.

Along the the heavyweight title fight, the main card on NBCSN will see the inaugural flyweight champion crowned as Magomed Bibulatov faces Donavon Frelow.