The main event of tonight’s Bellator 146 will be a middleweight bout as Hisaki Kato looks to score his second victory in Bellator when he meets Melvin Manhoef. 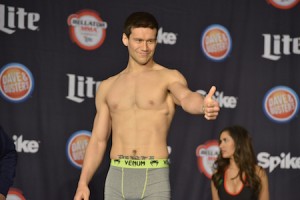 Kato (5-1) made his Bellator debut earlier this year and shocked the mixed martial arts community when he scored potentially the knockout of the year against Joe Schilling.

On yesterday’s edition of The MMA Report Podcast, Kato was a guest on the show to talk about his fight tonight against Manhoef and also discussed getting a potential title shot with a victory tonight in Oklahoma.