Bellator will return to the WinStar World Casino in Thackerville, Oklahoma on Friday night for Bellator 146 and the event will be headlined by a middleweight bout as Hisaki Kato meets Melvin Manhoef. 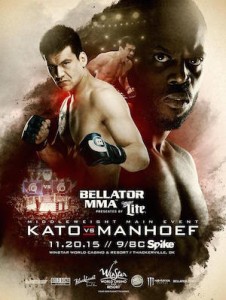 Along with the middleweight main event, the main card will feature a key featherweight bout as Bubba Jenkins meets Jordan Parsons.

Check out a breakdown of the five fights that will be on the main card broadcast on Spike TV.

Hisaki Kato (5-1) vs. Melvin Manhoef (29-12-1, 2NC)
The Bellator debut of Kato came back in June and he scored potentially the knockout of the year when he defeated Joe Schilling in the second round at Bellator 139. All of his victories have come by TKO/KO and four of his six fights have ended in the first round.

Manhoef enters this fight with only two wins in his last six fights (2-3, 1NC) and is coming off a no-contest against former Bellator middleweight champion Alexander Shlemenko. Initially, he lost to Shlemenko by knockout, but the fight was over turned to a no-contest when Shlemenko failed his post fight drug test.

Bubba Jenkins (9-2) vs. Jordan Parsons (11-1)
The Bellator debut of Jenkins came over two years ago as a lightweight and he has won six of his eight fights in the promotion. He dropped down to the featherweight division last year and he enters this fight following a TKO win against Joe Wilk at Bellator 139.

Parson enters Bellator 146 on a four fight winning streak and two of those wins have come in Bellator. The Michigan native recently moved his training to the Blackzilians and both of his wins in Bellator have come by stoppage.

Ricky Rainey (11-3) vs. Chidi Njokuani (13-4)
Since losing to Michael Page last year, Rainey has won back to back fights and both of those wins came by TKO/KO. His most recent win came in May as he defeated Jesse Juarez by knockout at Bellator 137.

Njokuani is making his Bellator debut and he is unbeaten in his last five fights. His last three wins have come by decision and the most recent on came in May at Tachi Palace Fights 23 against Max Griffin.

Brandon Girtz (13-4) vs. Derek Campos (15-5)
The biggest victory of Girtz’s career came in his last fight as he defeated Melvin Guillard by split decision at Bellator 141. It was his second straight win and he will be looking to even up the score against Campos as he lost a decision to him at Bellator 96 in 2013.

Campos has alternated wins and losses in his last four fights and he is coming off a submission defeat against Michael Chandler. His last two fights have ended in the first round and to this point, he has never been defeated in back to back fights.

Houston Alexander (16-12-1, 2NC) vs. Guilherme Viana (6-2)
Alexander is returning to the Bellator cage following a fight outside of the promotion in July, which was a TKO defeat against Tony Lopez. He is winless in his last three fights (0-2-1) and his last win came at Bellator 117 against Matt Uhde.

Viana made his Bellator debut in March and was defeated by Francis Carmont. The defeat snapped a three fight winning streak and both of his career defeats have come by decision.

The current Bellator 146: Kato vs. Manhoef fight card is below.