The Shamrock FC amateur middleweight title will be on the line on Saturday in St. Louis, Missouri as champion Shaun Scott has a rematch against Jason Christeson. 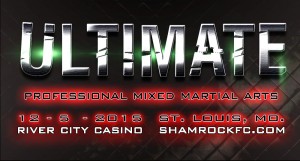 The first meeting between Scott and Christeson took place in September and Scott won by TKO at the end of the first round when Christeson did not answer the bell for the second round.

On a recent edition of The MMA Report Podcast, Scott (8-2) joined the show to talk about his upcoming rematch against Christeson.