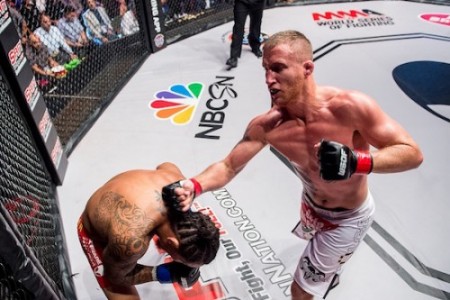 The WSOF 29 fight card has a new venue as the March 12th fight card will now come from the Bank of Colorado Arena on the campus of the University of Northern Colorado in Greeley, Colorado.

The new venue for WSOF 29 was announced by the promotion on Saturday night.

WSOF 29 will be headlined by a title fight as Justin Gaethje defends the WSOF lightweight title against Brian Foster and tickets for the fight card are now available on the University of Northern Colorado’s online ticketing platform.

Gaethje (15-0) is coming off a successful title defense against Luis Palomino at WSOF 23 and seven of his eight wins in the promotion have come by TKO/KO. Foster (25-8) secured this title shot by winning the one-night, eight-man lightweight tournament at WSOF 25 and he has won seven of his last nine fights.

Additional fights for WSOF 29: Gaethje vs. Foster will be announced shortly by the promotion.