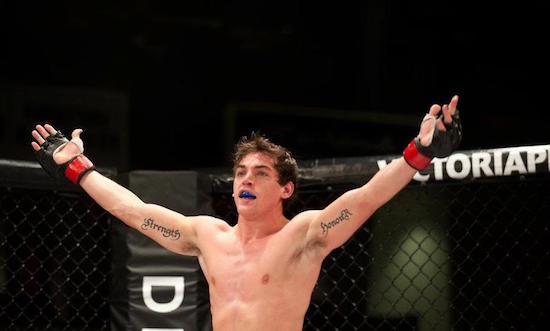 Canadian Tyler Dolby will be looking for his first professional victory tomorrow night in Vancouver at Battlefield Fight League 41 as he will be facing Chris Day in a featherweight bout.

“It’s kind of a weird story,” Dolby explained to The MMA Report. “I had a buddy of mine who would always come out to see me play. We were just childhood friends and told me to come out to try it out. It was basically in the back of a gym. I tried it out and absolutely loved it. We really did not know what we were doing then. Just kind of snow balled from there. Took a couple of fights. Won them and started traveling from there.”

Throughout my time reporting on this sport, I have talked to fighters that have made the transition from various sports to mixed martial arts. Former football players have told me about the skills that transfer from the gridiron to the cage, but what hockey skills work in mixed martial arts?

“I think the explosive leg strength that you get from hockey. Just being on your toes and really exploding,” Dolby explained. “Just having a good base. Kind of hard to be knocked over. Good balance and different things like that. That is one thing that I have really noticed in the transition over that has really helped. A lot of people think that MMA in an individual sport, but it’s very team orientated when you are training. Very similar to a hockey dressing room.”

When it comes to Dolby’s mixed martial arts career, he got off to a great start as he went 3-0 in the amateur ranks. Following those victories, he decided it was time to turn professional and he was unable to get the victory in his pro debut. He learned some valuable lessons in his pro debut, such as not taking anything lightly in this sport.

“Mental strength for me. Just mind was not there. I actually injured my shoulder in that fight and it really got to me,” he said. “I was kind of thinking of other things going into that fight. I had a lot going on. Obviously, no excuses. After that, I realized how big the mental game of fighting is. Always be focused and not let little things bother me. I honestly think it was the best thing to happen to me. I was taking that fight too lightly and I will never do that again that’s for sure.”

Heading into his fight tomorrow night, Dolby looks at 2016 as a breakout campaign for him. He has gotten past some injuries he has been dealing with and wants to show everyone what he is made of. He believes that no one has seen what he has to offer and plans to showcase his skills against Day, who he knows is a tough opponent.

“I have not seen a lot of video on him to be honest. I know he is good off his back and has good jiu-jitsu,” Dolby said about Day’s abilities. “He is very slick and very tough. He can take punches. Likes to stand in the pocket and trade. I think he is very well-rounded. Where I think I will probably have the advantage is probably the athleticism, explosiveness, and the transition game. I think that will be big for me. Use my speed.”

Dolby knows the key to victory will be to stay composed and stay in the moment. If he is able to accomplish those things, he believes he will walk away with a stoppage victory at Battlefield Fight League 41.