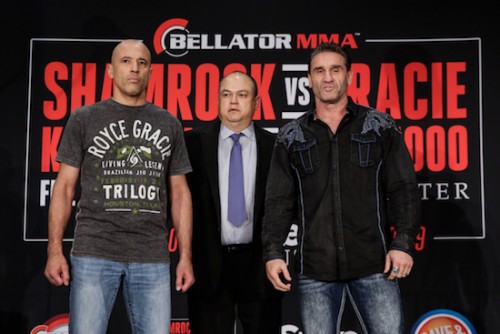 The first Bellator tent pole event of 2016 will take place tonight as Bellator 149 will come from the Toyota Center in Houston, Texas and will be headlined by a trilogy bout as Royce Gracie returns to competition to face Ken Shamrock.

Along with the trilogy bout in the main event, the co-main event will be a heavyweight fight as Kevin “Kimbo Slice” Ferguson and Dhafir “Dada 5000” Harris will settle their differences inside the Bellator cage.

Check out a breakdown of the five fights that will be on the main card broadcast on Spike TV.

Ken Shamrock (28-16-2) vs. Royce Gracie (14-2-3)
After being away from the sport for nearly five years, Shamrock returned to mixed martial arts competition last year and lost to Kimbo Slice in the main event of Bellator 138. He is 2-3 in his last five fights and his last victory came in October of 2010 against Johnathan Ivey by unanimous decision.

Gracie is returning to mixed martial arts competition for the first time since 2007, which was a decision win over Kazushi Sakuraba. Following the fight, it was revealed that Gracie failed his post fight drug test for anabolic steroids. Prior to that fight, he had gone 1-1-2 in his previous four fights and the victory came against Akebono Taro in 2004.

Kevin “Kimbo Slice” Ferguson (5-2) vs. Dhafir “Dada 5000” Harris (2-0)
Ferguson will be looking for back to back wins in his MMA career for the first time since starting 3-0 in the sport. His victory over Shamrock at Bellator 138 came at the 2:22 mark of the opening round and four of his five victories in the sport have come by finish.

Harris will be stepping into the cage for the first time tonight since defeating Tim Papp by TKO in 2011. Both of his wins have come by TKO/KO in the opening round and the other victory came against Cedric Jones.

Emanuel Newton (25-5) vs. Linton Vassell (15-5)
Newton will be looking to snap a two fight losing streak when he meets Vassell in a rematch of their fight at Bellator 130, which Newton won by submission in the fifth round to retain the Bellator light heavyweight title. Prior to his recent defeats, he had won seven fights in a row and two of those wins came against Muhammed “King Mo” Lawal.

After starting 3-0 in Bellator, Vassell has dropped two of his last three fights and enters tonight’s event following a lost to Lawal in the Bellator light heavyweight tournament in September. His last win came nearly one year ago as he defeated Rameau Thierry Sokoudjou at Bellator 134 by TKO.

Melvin Guillard (32-15-2) vs. Derek Campos (15-6)
Just like Newton, Guillard will be looking to snap a two fight losing streak tonight in Houston. He lost his Bellator debut last year against Brandon Girtz and his last win came in 2014 against Gesias “JZ” Cavalcante at WSOF 11.

Campos will also enter this fight with back to back defeats and he took this fight on short notice when Mike Bronzoulis pulled out of the event with an injury. His most recent defeat came against Girtz in November at Bellator 146 and he is 1-3 in his last four fights.

Emmanuel Sanchez (12-2) vs. Daniel Pineda (21-11)
Sanchez will be looking for his third straight win tonight as he faces Pineda in a catchweight bout. His last two victories have come by split decision and the most recent one came in November against Justin Lawrence at Bellator 145.

Since exiting the UFC in 2014, Pineda has won three in a row and all of his recent wins have come by submission in Legacy FC. This will be his third fight in the Bellator cage and he has lost both of his previous fights in the promotion.

The Bellator 149: Shamrock vs. Gracie III fight card is below.