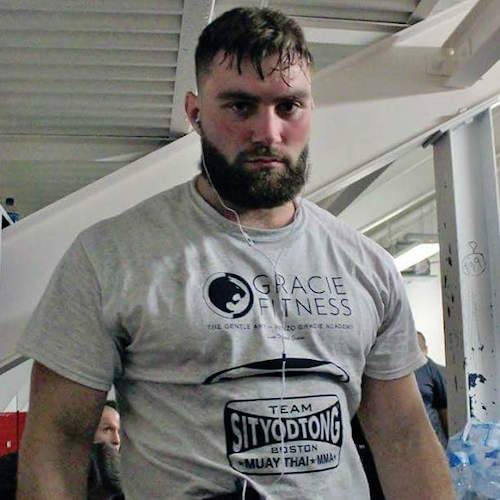 Amateur heavyweight Brendan Battles improved to 2-0 in his career last weekend at New England Fights 21 as he scored a stoppage victory in the opening round at Dave Smith. Both of his pro wins have come by stoppage in the first round and both have come in under 2 minutes.

Prior to deciding to become a fighter, he was an All-American wrestler in high school and that would lead to a scholarship in college. However, college was not for him as he decided after his sophomore year that he was tired of school and ended up calling his parents to let them know he was coming home to pursue a career as a mixed martial artist.

“It’s a grind. It’s certainly a grind,” Battles told The MMA Report. “I am actually out here working as we talk right now. I am plowing. You have to pay the bills and when I go fishing, I am normally up at 1. I am in the boat by 2:30-3 and probably work till 3 or 4 in the afternoon. I will try to get a nap in quickly before I head to Boston. I will be training for a couple of hours. It’s certainly a grind. Everyone knows that I am a pretty hard worker and I feel that is something that comes off in the fights. I definitely use it in my wrestling advantage and I truly believe no one works harder than me.”

With Battles being an amateur, the obvious question is when will he decide to turn professional? That is something he is leaving in the hands of the coaches, but it has been difficult for him to get fights. He has been booked for fights in the past and ultimately, the scheduled opponent ends up pulling out of the fight for whatever reason. Whether he remains as an amateur or if the decision is made to turn professional, Battles just wants one thing. To stay active and compete against guys that are not going to pull out of the fight before fight night.

Check out Battles complete interview from Tuesday’s edition of The MMA Report Podcast below.