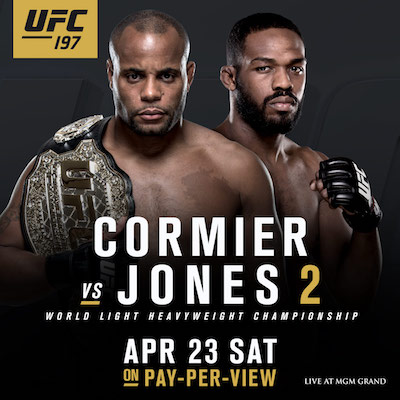 The fight booking was confirmed by the UFC on Saturday night during the UFC Fight Night 82 broadcast on FS1 and the co-main event of the fight card will also be a title fight as Demetrious Johnson defends the flyweight title against Henry Cejudo.

The first meeting between Cormier and Jones came at the beginning of last year and Jones won by unanimous decision to retain the UFC light heavyweight title. However, Jones would be stripped of the title a couple of months after their first meeting due to an incident outside of the sport and Cormier defeated Anthony Johnson to win the vacant UFC light heavyweight title.

Ticket information for UFC 197: Cormier vs. Jones II is expected to be announced shortly by the promotion.