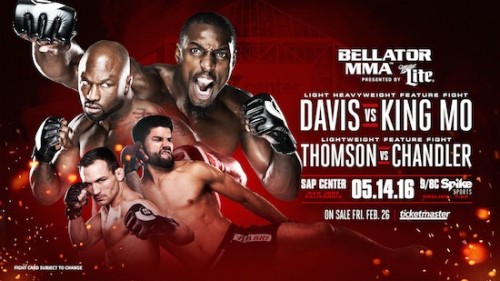 The second Bellator tentpole event of 2016 will take place on May 14 in San Jose, California and the fight card will be headlined by a number one contender fight in the light heavyweight division as Phil Davis will meet Muhammed “King Mo” Lawal.

Davis (15-3, 1NC) was signed by Bellator last year and won the one-night, four-man light heavyweight tournament at Bellator 142 with victories over Emanuel Newton and Francis Carmont. He is 6-2 in his last eight fights and three of those wins have come by stoppage. Lawal (19-4, 1NC) was supposed to meet Davis in the final of the one-night, four-man tournament. However, an injury forced him out of the tournament and he recently won Rizin FF Heavyweight Grand Prix.

Bellator 154: Davis vs. King Mo will come from the SAP Center and tickets will go on sale to the public on Friday, February 26.