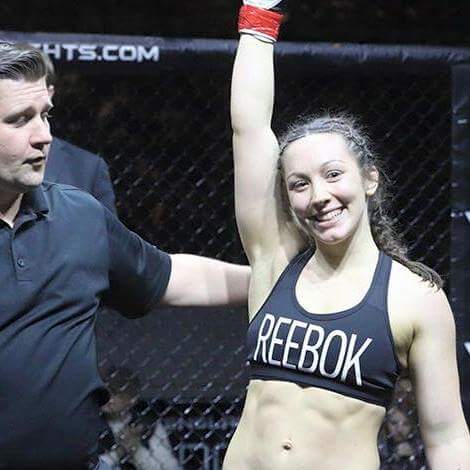 Strawweight Erin LaMonte remained undefeated in her amateur career last weekend at New England Fights 21 as she defeated Randi Beth Boyington by rear-naked choke submission at the 1:24 mark of the opening round.

The fight last weekend was a rematch of their initial meeting at New England Fights 20, which LaMonte (6-0) won by armbar at the 1:10 mark of the opening round. Shortly after the fight, Boyington asked for a rematch and LaMonte immediately said yes to the rematch.

While it took LaMonte 14 more seconds to get the victory this time, it was a dream on Tuesday of fight week that caused her to believe that she would end up beating Boyington by rear-naked choke submission.

“It kind of went down the way I thought,” LaMonte told The MMA Report. “I kind of called this one like I did the last one. I was thinking armbar and everyone was thinking, ‘just stay on top.’ I was like no. I am thinking I want some guard and that is what happened last time. Then this time, on Tuesday I had a dream. I woke up and I was like holy s**t. I just had a dream that I rear-naked choked this girl. So I am not saying I am Conor McGregor or anything, but I have called the last two which is pretty cool.”

With this victory, the pro debut of LaMonte could be around the corner. Ultimately, that is a decision she will make with her coaches as she trust them completely with her career. A timetable for her next fight has not been determined at this time, but she is someone to watch for in the 115 pound division on the regional scene.

Check out LaMonte’s complete appearance from the February 9 edition of The MMA Report Podcast below as she talked about her win over Boyington and what she is planning next.