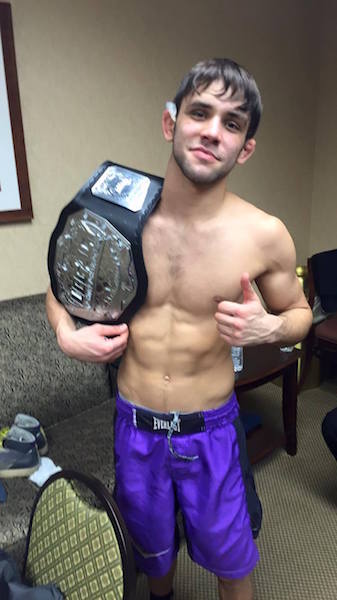 Manny Vazquez became the Legacy FC bantamweight champion last Friday night in Minnesota when he surprised the mixed martial arts community by defeating Ricardo Ramos by submission at the 1:45 mark of the opening round.

Ramos was an overwhelming favorite in the fight (6/1) and many people believed that UFC President Dana White was in attendance to see Ramos fight. Prior to the fight, Vazquez had told The MMA Report that he knew that he was better than Ramos and would prove that at Legacy FC 51. He ended up proving that point and following the fight, he made sure to let White know he belongs in the premiere mixed martial arts promotion.

Since the victory last Friday night, Vazquez took a couple of days off but he is back in the gym now. He knows he needs to stay ready in case there is an opporunity for him to set up on short notice in the UFC.

“I went into this fight kind of nervous because it was so short notice against such a tough opponent,” he said. “I just got to stay ready because I want to go in there with the confidence knowing that I am in the best shape I can be in. I got to live like that because you never know what is going to happen.”

Check out Vazquez’s complete appearance from Thursday’s edition of The MMA Report Podcast below.