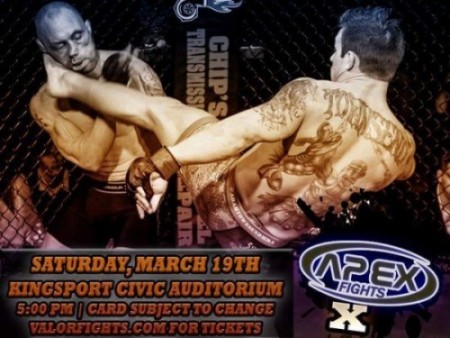 APEX Fights 10: Chandler Cole says if they could belt in ground and pound, he would be a purple belt

The feature amateur bout on tonight’s APEX 10 fight card will see Chandler Cole step into MMA competition for the twelfth time in his career as he will meet Matt Foley.

Cole (11-0) was a guest on Thursday’s edition of “The MMA Report Podcast” to preview his fight against Foley and explained his mentality when it comes to preparing for his opponent.

“I try to not watch a lot of film,” Cole explained. “I will watch a couple of things here and there. A lot of my fights, I went out and took them down. I had an interview the other day and I told the guy if they could belt in ground and pound, I would be a solid purple belt. No doubt.”

Check out Cole’s complete interview from Thursday’s episode of “The MMA Report Podcast” below and be sure to subscribe to the show on iTunes and Stitcher.