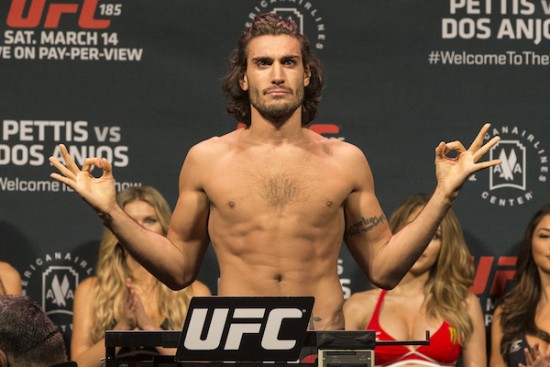 The UFC will be heading to Ottawa on June 18 for UFC Fight Night 89 and the promotion officially announced seven new fights for the event including a middleweight bout between Elias Theodorou and Sam Alvey.

The fight bookings were announced by the UFC on Tuesday and the other new fight bookings are Steve Bosse vs. Sean O’Connell, Jason Saggo vs. Leandro Silva, Misha Cirkunov vs. Ion Cutelaba, Olivier Aubin-Mercier vs. Thibault Gouti, Tamdan McCrory vs. Krzysztof Jotko and Alex Garcia vs. Colby Covington.

UFC Fight Night 89 will take place on June 18 from The Arena at TD Place in Ottawa, Ontario, Canada and the event will be headlined by a welterweight bout as former UFC title challenger Rory MacDonald meets Stephen Thompson.

Tickets for UFC Fight Night 89: MacDonald vs. Thompson will go on sale Friday, April 15 at 10 a.m. ET. Tickets will be available at TD Place, online and by phone at 1-877-788-FANS (3267). Ticket sales are limited to eight (8) per person. UFC Fight Club members will have the opportunity to purchase tickets Wednesday, April 13 at 10 a.m. ET via the UFC Fight club website. A special Internet ticket pre-sale will be available to UFC newsletter subscribers Thursday, April 14 starting at 10 a.m. ET. To access this presale, users must register for the UFC newsletter through UFC.com.

The current UFC Fight Night 89: MacDonald vs. Thompson fight card is below.