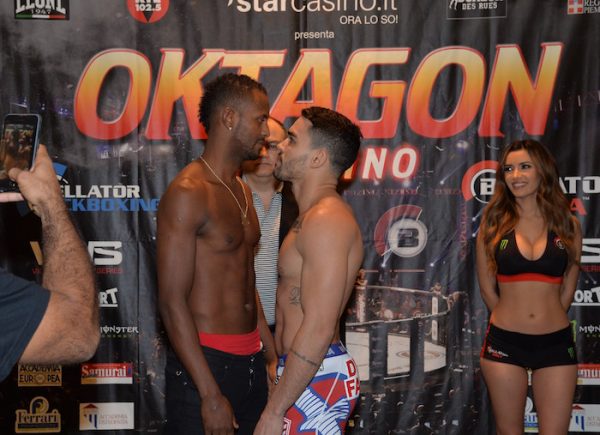 Bellator will be holding its first event outside of North American tomorrow in Italy as Bellator 153 will come from the Pala Alpitour in Turin, Italy and the event will be headlined by a lightweight bout as Patricky Pitbull meets Bellator newcomer Kevin Souza.

This event will air via tape delay tomorrow night at 10 p.m. ET/PT on Spike and along with the lightweight main event, the co-main event will see the Bellator debut of Italy’s own Alessio Sakara as he meets Bellator veteran Brian Rogers in a light heavyweight bout.

Patricky Pitbull (15-7) vs. Kevin Souza (15-4)
Pitbull is coming off a knockout win against Ryan Couture at Bellator 148 in January and he has alternated wins and losses in his last five fights. He will be looking for back to back victories for the first time since 2014 and this will be his third fight in four months.

After going 3-1 in the UFC, Souza parted ways with the promotion and he took this fight against Pitbull on seven days notice. This will be his first fight since losing to Chas Skelly at UFC Fight Night 77 and that defeat snapped a ten fight winning streak.

Alessio Sakara (17-11, 1NC) vs. Brian Rogers (12-8)
Sakara enters Bellator after going unbeaten in his last two fights (1-0, 1NC) and is coming into this fight following a TKO win in September against Dib Akil at Final Fight Championship 19. The former UFC middleweight moved up to light heavyweight following his exit from that promotion and did a majority of his training camp for this fight at American Top Team in South Florida.

Rogers moved up to the light heavyweight division late last year and defeated Virgil Zwicker by arm-triangle choke submission at Bellator 147. The victory snapped a two fight losing streak and was his first win since Bellator 119 (5/9/14) against Adrian Miles.

A.J. McKee (3-0) vs. Danilo Belluardo (5-3)
All of McKee’s fights have taken place in Bellator and he has won all of those fights by stoppage in the opening round. His most recent victory came in December as he defeated J.T. Donaldson by knockout at Bellator 147.

Belluardo is making his Bellator debut and is currently on a four fight winning streak. Three of his five wins have come by stoppage and his most recent win came in September at Final Fight Championship 19 against Geven Hubert.

Anastasia Yankova (2-0) vs. Anjela Pink (0-0)
The pro mixed martial arts debut of Yankova came in 2013 and both of her victories have come by submission. Her most recent fight came in October as she used an armbar to defeat Chommanee Sor Taehiran at Fight Nights.

Daniele Miceli (2-0) vs. Daniele Scatizzi (6-2)
Miceli made his pro debut last year and is coming off a decision win against Massimo Salvatore at Venator FC 2. This will be his first fight in December and his third fight in under thirteen months.

Scatizzi enters this fight with back to back defeats after starting his career 6-0. Just like Miceli, he holds a victory over Salvatore and he enters this fight following a submission defeat against Alessandro Botti at Venator FC 2.

The current Bellator 152: Pitbull vs. Souza fight card is below.