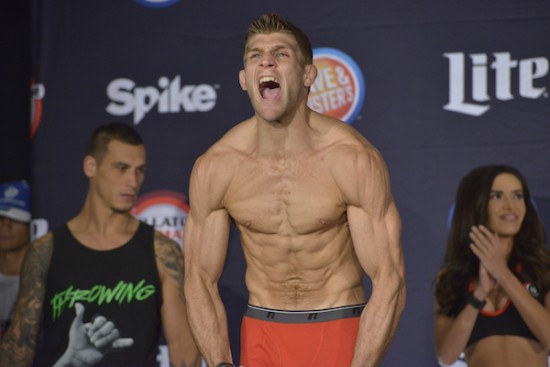 Bellator 153: Brent Primus was heartbroken when his opponent changed from Patricky Pitbull to Gleristone Santos

Undefeated lightweight Brent Primus will be returning to the Bellator cage in seven days as he is going to face Gleristone Santos on the main card of Bellator 153 coming from the Mohegan Sun Arena in Uncasville, Connecticut.

Originally, Primus (6-0) was set to face Patricky Pitbull in the main event of tomorrow’s Bellator 152. However, Bellator decided to go a different round and during Tuesday’s edition of “The MMA Report Podcast,” Primus admitted that he was heartbroken when he was informed that he would no longer be fighting Pitbull and his new opponent was Santos at Bellator 153.

“To tell you the truth, I have no idea. I signed the contract. He signed the contract and we were both training for each other for a few weeks,” Primus said about why his fight with Pitbull was scratched. “As soon as they switched it on me, I was heartbroken for sure. I definitely wanted to fight a top guy and a big name like Pitbull. I am not exactly sure why we are not fighting. But I am sure later on this year or later on next year, we will get down.”

“He [Pitbull] was a big name for me and skyrocket me into that title contention,” he continued. “The guy I am fighting now, he is dangerous. Has a lot of experience, but he does not have that name and that is what I want. I want to get closer to that belt and I think Pitbull would have done a little bit for me. But at the same time, we had those contracts signed and was kind of a heart break to sign a contract and then have it switched on you. You sign that contract and you feel so much better. All of the relief. I do not have to worry about nothing. I have fighting this guy at this date. Things happen in this fight and I am ready to fight whoever they put in front of me.”

Check out Primus’s complete interview from Tuesday’s episode of “The MMA Report Podcast” below and be sure to subscribe to the show on iTunes and Stitcher.”