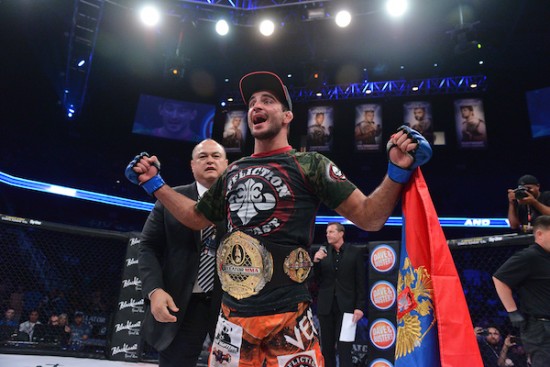 Bellator 153 will be taking place later this month at the Mohegan Sun Arena in Uncasville, Connecticut and the Mohegan Tribe Department of Athletic Regulations will be conducting two weigh-ins on Thursday, April 21.

The weigh-in procedures were recently sent to the fighters scheduled to be on the April 22 fight card by the commission and fighters will have the ability to weigh-in on April 21 as early as 11:00 a.m. local time.

Along with the ability to weigh-in earlier than the official weigh-in event (5 p.m. local time), the commission has informed the fighters that the commission recently banned the use of IV’s “in an effort to curtail unhealthy weight loss.”

The complete letter that was sent to Bellator 153 fighters from the Mohegan Tribe Department of Athletic Regulations is below.

Important Notice For All Fighters and Managers

In the combative sports industry, regulatory commissions are in the process of determining the best way to discourage excessive and extreme rapid weight loss prior to a contest. It should not be a badge of honor to lose weight in a manner that is unsafe and unhealthy, and in the near future there will be new safeguards implemented that will affect you.

One immediate safeguard implemented by The Mohegan Tribe Department of Athletic Regulation as of January 30, 2016 is the banning of all IV hydration practices/uses, in an effort to curtail unhealthy weight loss. If a fighter is found to have utilized an IV for rehydration after weighing in at Mohegan Sun, he/she will not fight and will be fined and suspended nationally for 6 months.

In addition, all fighters on the upcoming Bellator 153 card will have two options to weigh in on April 21, 2016 at Mohegan Sun. The following processes will be utilized:

All Fighters must declare by 6:00 PM on Wednesday April 20, 2016 with Bellator Officials (information will be forward to the MTDAR) which process of weighing-in that they will be selected. The fighter’s decision will be final once it has been reported to the MTDAR.

– If a fighter decides to weigh-in prior to the public weigh-in, they will be able to do so between 11:00 am and 12:00 pm. This will be considered their OFFICIAL WEIGHT. If for any reason the fighter fails to make weight, he/she will have up to two hours to re-weigh at which time the weight will be considered FINAL. Any fighter not having officially weighed in by 12:00 p.m. must wait until 5:00 p.m. to weigh-in publicly. After the weigh-in the MTDAR will take the fighters blood pressure and pulse, this will not affect your eligibility to fight the following day.

-All fighters must attend the Live Weigh-in Event. Fighters who have completed the weigh-in process shall step on the scale and have their previously recorded official weight announced. Fighters who have not yet weighed will be OFFICIALLY WEIGHED at this time. If for any reason the fighter fails to make weight, he/she will have up to two hours to re-weigh at which time the weight will be considered FINAL.

* All fighters are required to sign their Mohegan Tribe Athletic Regulation bout contact prior to stepping on the scale.

Bellator 153 will be headlined by the promotional debut of former UFC lightweight champion Benson Henderson as he will challenge Bellator welterweight champion Andrey Koreshkov for the 170 pound title.