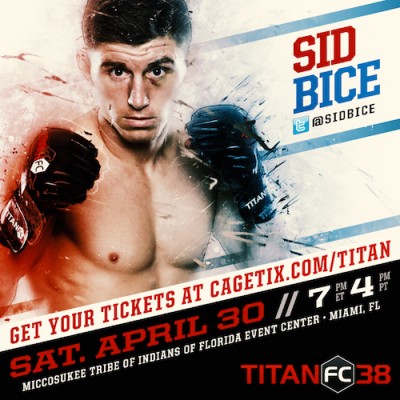 Undefeated flyweight Sid Bice is scheduled to return to the Titan FC cage at the end of the month as a title shot in the Titan FC 125 pound division is on the line when he meets former title challenger Pedro Nobre.

Earlier this week, the UFC announced that The Ultimate Fighter 24 will determine the next title challenger in the flyweight division and tryouts are set to take place in Las Vegas on April 25. During yesterday’s edition of “The MMA Report Podcast,” Bice talked about the potential of being on the UFC reality show.

“I still got to talk to my coach,” Bice said. “I just seen that posted yesterday as well. I think that would be an awesome opportunity. Especially to win the tournament and get a shot at the title right away. Going into the UFC, I think that would be awesome. But it’s something I got to sit down with my coach and manager and talk to them about it. I still plan on fighting on the 30th no matter what. I think you can do the tryout and you probably would not get into the house till later. But we will see.”

Check out Bice’s complete interview from Thursday’s episode of “The MMA Report Podcast” below and be sure to subscribe to the show on iTunes and Stitcher.