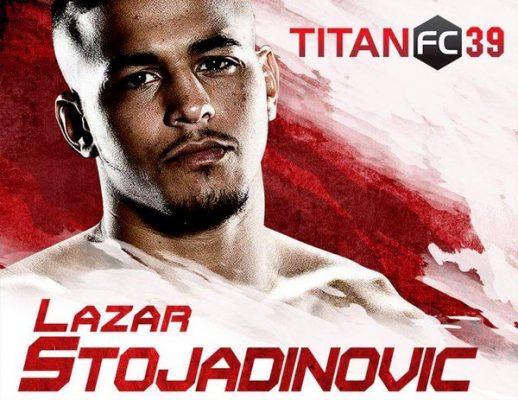 After Chino Duran pulled out of their last fight, Lazar Stojadinovic explains why he accepted fight at Titan FC 39

Last month’s House of Fame card was scheduled to see Lazar Stojadinovic take on Chino Duran in a catchweight bout. However, Duran pulled out of the event and the two will now meet at Titan FC 39 next weekend in South Florida in a featherweight bout.

Stojadinovic (10-5) enters this fight on a six fight winning streak and four of those wins have come by stoppage. His most recent win came in January at Absolute Fighting Championship 24 as he defeated Drew Lipton by TKO in 23 seconds.

During this past Friday’s “The MMA Report Podcast,” Stojadinovic was a guest on the show to preview his fight at Titan FC 39 against Duran. He explained why he decided to take a fight with him on the June 10 card after Duran pulled out of their fight last night and stated he hopes that Duran will show up on fight night this time.

“There was definitely some hesitation on taking the fight,” Stojadinovic stated on The MMA Report Podcast. “Like I said after he did not show up for the HOF, I basically said I did not want to hear his name. I don’t even want it brought up to me as an opponent. I did not want anything to do with him. So that was a concern and he called me. Kind of squared it off and apologized that he didn’t show. He promises to show up this time and basically he put up a bond.”

“If he doesn’t show up, the money he put down is mine and that made me feel more comfortable in taking the fight,” he continued. “Just because I do not think anyone wants to put down money and lose money without showing up. I am pretty sure he had a good reason to pull out. He has fought tough guys in the past so I don’t think that is an issue. I hope not. I hope he actually shows up June 10 and I think he will. I don’t think he would put himself in that situation for the third time now. Hopefully he shows.

Check out Stojadinovic’s complete interview from Friday’s edition of “The MMA Report Podcast” below and be sure to subscribe to the show on iTunes and Stitcher.