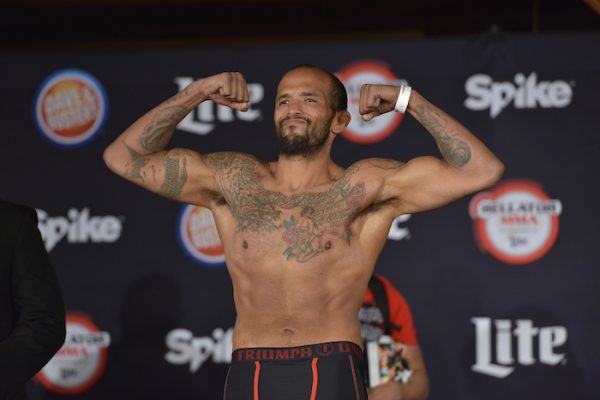 Bellator 155: Joey Beltran explains his decision to move back to heavyweight

After having ten fights at light heavyweight and middleweight, Joey Beltran will be returning to the heavyweight division on Friday night as he will meet Chase Gormley at Bellator 155 in Boise, Idaho.

Beltran (17-12, 1NC) is coming off a TKO victory in December against Lamont Stafford in a light heavyweight bout outside of Bellator and this will be his first fight in the promotion since losing to Kendall Grove by TKO at Bellator 143 in September.

During this past Thursday’s edition of “The MMA Report Podcast,” Beltran was a guest on the show to preview his fight against Gormley at Bellator 155. Along with previewing his fight, Beltran talked about the decision to move back to heavyweight and explained how part of this decision came after listening to what Joe Rogan said about being able to rehydrate your body after cutting weight for a fight.

“Honestly, I am not a scientist by any means,” Beltran stated. “But I look at it like this. I was listening to Joe Rogan talk about it as a matter of fact and I have to give him credit. He was talking about your brain can not rehydrate over night. You just can’t do it. You can rehydrate your body and do IV’s or do whatever the case maybe. But you can’t rehydrate your brain. So I was thinking. The one time I got knocked out at heavyweight, I got knocked out one time. It was by a guy that was 6’5 260 pounds and was probably at the time was juiced. Because he got popped like two fights after that.

“Alright, not going to name names but whatever,” he continued. “So after that, I kind of had it put into my head, now it’s the time to drop down in weight. So I did and I had mixed results. But then I got dropped three more times doing that against lighter guys that supposedly don’t hit as hard as heavyweights. So I was like, why am I getting dropped. I have seen people throughout all of my years lose their chin and they lose it everywhere. It’s not just in the fights. They lose it everywhere. In the gym and if they get clipped with 16 ounce gloves and head gear. They get wobbly or they downright stop sparring all together for their training camps.”

“I have seen all of these situations in front of me from past teammates. I know that I still have a [expletive] chin. I still have it and I still have my wits about me. I don’t get headaches. I don’t get dizzy spells. I don’t have none of these symptoms. Maybe it does have to do with cutting weight. I don’t know. But on top of that, I think if these supposed little guys. These 85’ers are hitting just as hard as heavyweights and they don’t get [expletive] tired and they are fast. I think heavyweight — I know that the margin or error is extremely small in the earlier round. After that, the pace is going to slow down and it’s going to be fun.”

Check out Beltran’s complete interview from Thursday’s edition of “The MMA Report Podcast” below and be sure to subscribe to the show on iTunes and Stitcher.