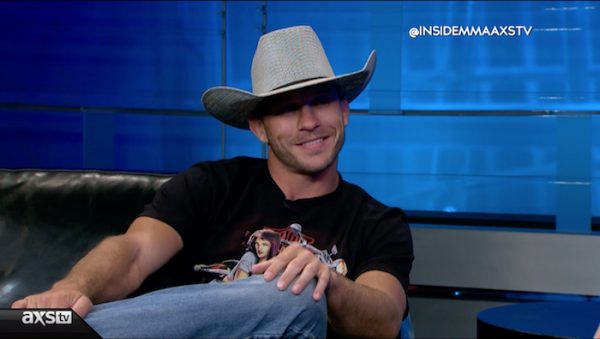 Donald Cerrone: It’s my job to do media obligations

Former UFC lightweight title challenger Donald “Cowboy” Cerrone will be returning to the UFC octagon on June 18 at UFC Fight Night 89 as he will meet Patrick Cote in the co-main event of the fight card in a welterweight bout.

This will be the second straight welterweight bout for Cerrone (29-7, 1NC) as he is coming off a submission victory in February at UFC Fight Night 84 against Alex Oliveira. During last night’s episode of “Inside MMA” on AXS TV, Cerrone was a guest on the show to promote his upcoming fight and he was asked about his recent comments concerning Conor McGregor deciding not to come to the UFC 200 press conference.

“First, we are fighters right and second we are entertainers,” Cerrone said. “That is my job. Media is my job and Conor would not be Conor if the UFC — Cowboy would not be Cowboy if the UFC does not build me up. If no one knew who I was or did not know my personality or anything, that is my job is to go out and entertain. First, I fight. Second, I entertain and it’s my job to do the media obligations that are set for me. It’s part of the job. For Mr. Press Conference not to want to do a press conference, c’mon man. It’s whatever.”

Check out Cerrone’s complete interview from “Inside MMA” on AXS TV below.