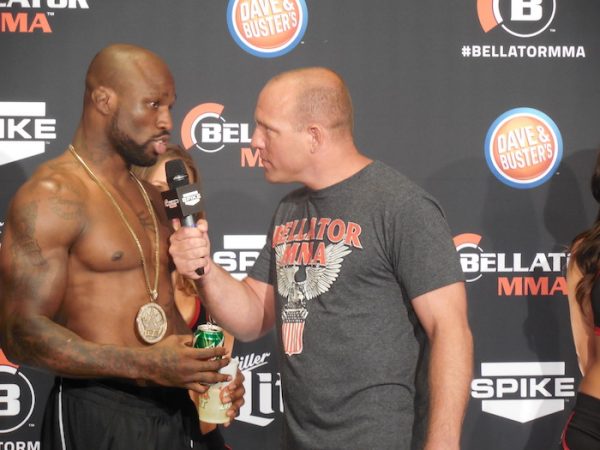 King Mo: Phil Davis is not going to stand with me, he is going to try to wrestling with me

The main event of Saturday’s Bellator 154 at the SAP Center in San Jose, California will be a light heavyweight bout as Muhammed “King Mo” Lawal meets Phil Davis and the winner is expected to be the next title challenger for Bellator light heavyweight champion Liam McGeary.

Lawal (19-4, 1NC) is currently on a seven fight winning streak and he enters this fight after winning the Rizin heavyweight tournament at the end of last year. During this past Thursday’s edition of “The MMA Report Podcast,” Lawal responded to recent comments made by Davis about how he was “struggling to see where King Mo could beat him at.”

“The truth be told. He knows the truth,” Lawal said on The MMA Report Podcast. “He is not going to stand with me. He is going to try to wrestling with me. I am cool with that. Or try to grapple with me. All of a sudden he has one knockout and he is a knockout artist. You see his standup. He likes to kick, here and there. He does not commit to any strikes. He is a 1-2, double leg. Faint, double leg. Upkick, double leg. Lead left, left head kick. That is about it. He moves around and hops around. He can say all he wants. It is what it is. I don’t really care.”

Check out Lawal’s complete interview from Thursday’s episode of “The MMA Report Podcast” below and be sure to subscribe to the show on iTunes and Stitcher.