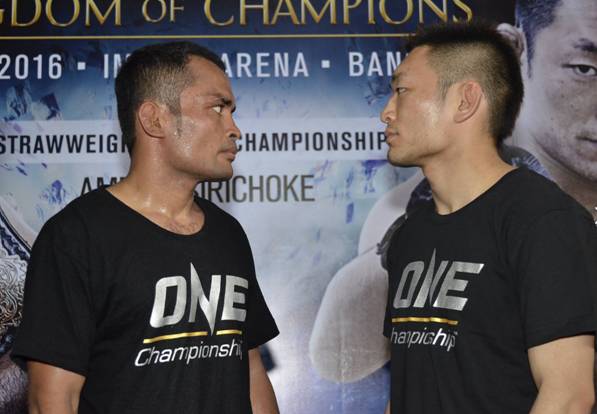 ONE Championship will be heading to the Impact Arena in Bangkok, Thailand on May 27 for ONE Championship 43: Kingdom of Champions and the complete fight card has been announced by the promotion.

The fight card will be headlined by Dejdamrong Sor Amnuaysirichoke defending the ONE Championship strawweight against Yoshitaka Naito and the co-main event will also be a title fight as featherweight champion Marat Gafurov will defend the 145 pound title against Kazunori Yokota.

“This is monumental progress for the sport of mixed martial arts in the world and in Thailand, and also one giant step forward for ONE Championship as we bring martial arts back home to the ancient city of Bangkok,” ONE Championship Thailand President Kamol ‘Sukie’ Sukosol Clapp said in a press release. “There is nothing like the atmosphere of a live ONE Championship event, and we want to show fans exactly what is in store. With the country’s top rock bands electrifying the stadium, ONE: KINGDOM OF CHAMPIONS is poised for an incredible evening of adrenaline-pumping action.”

The current ONE Championship 43: Kingdom of Champions fight card is below.