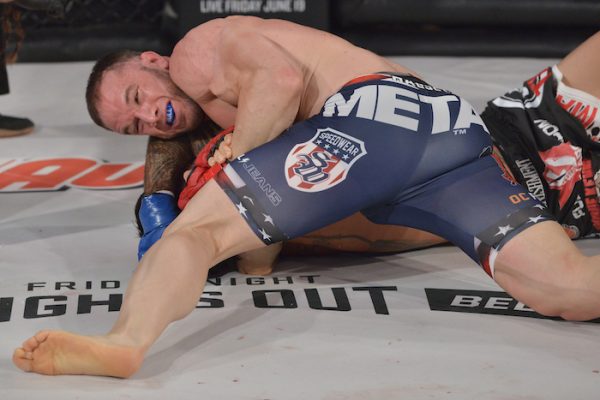 After a rough 2015, Brandon Halsey talks about changes he made heading into upcoming fight at Bellator 156

Former Bellator middleweight champion Brandon Halsey will be looking to secure a title shot on June 17 at Bellator 156 as he will meet John Salter on the fight card coming from the Save Mart Center in Fresno, California.

His road back to the middleweight title will begin with his fight against Salter later this month. Since the fight against Carvalho, Halsey has made several changes in his career, including training at a new gym and having new management. He talked about the changes he has made on yesterday’s edition of “The MMA Report Podcast” and stated that he plans to show the new version of Brandon Halsey on June 17 at Bellator 156.

“Obviously, 2015 was a rough year for me. But I think 2016 is going to be a great year,” Halsey stated on The MMA Report Podcast. “Every year from now on I think is going to be a great year. I look back on that time and look at it as a learning tool. I look back and said, ‘what can I do differently as a fighter? Not only as a fighter, but as a person to better myself and improve?’ And I look back at the three years I have been doing MMA, have I really improved? Have I really elevated my skills to level that I want to be at?”

“And the question I came to is no, I haven’t,” he continued. “I have not gotten to the skill level I want to be. Now that I kind of stepped back and tweaked everything as far as my training, my diet and even my management. It’s where I want to be at and it’s elevated myself in these past three to four months than I have in the last three years of my entire MMA career. This fight is something I am going to showcase. Show the world. Show the fans this new reinvented Brandon Halsey.”

Check out Halsey’s complete interview from Tuesday’s edition of “The MMA Report Podcast” below and be sure to subscribe to the show on iTunes and Stitcher.