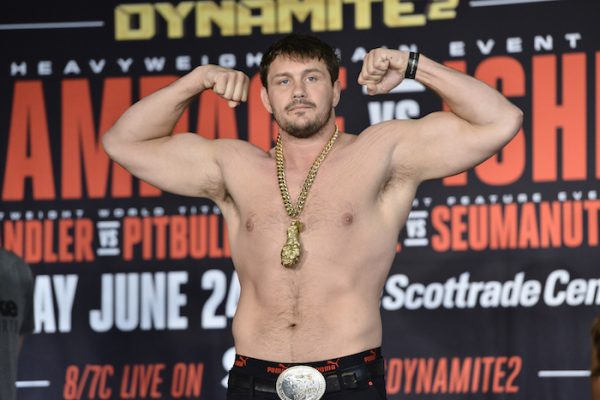 Matt Mitrione won his Bellator debut on Friday night against Carl Seumanutafa by knockout in the opening round and he is slated to return next month at Bellator 158 against Oli Thompson.

The fight booking was announced in the Bellator cage following Mitrione’s win over Seumanutafa.

Bellator 158 will come from the O2 Arena in London, England on July 16 and will be headlined by a welterweight bout as former Bellator champion Douglas Lima returns to the Bellator cage for the first time since losing the title last year as he will face Paul Daley.

Mitrione (10-5) was dropped in the opening round by Seumanutafa, but was able to recover and ended up scoring the knockout victory at the 3:22 mark of the opening round. As long as Mitrione is cleared by the Missouri Office of Athletics in his post fight examination, there should be no issues with him returning in a month. Thompson (17-8) is currently on a five fight winning streak and this will be his Bellator debut. His most recent win came in December as he defeated Fernando Rodrigues Jr. by TKO in the first round.

The current Bellator 158: London fight card is below.