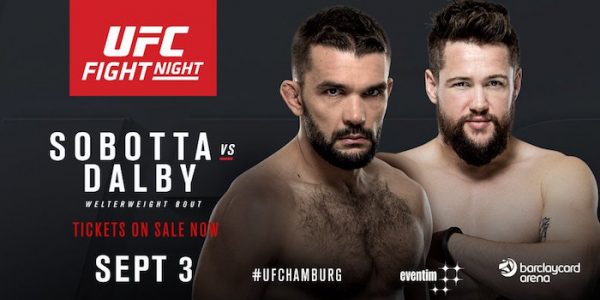 A welterweight bout has been added to the UFC Fight Night card in Hamburg, Germany on September 3 as Peter Sobotta will meet Nicolas Dalby.

The fight booking was announced by the UFC on Tuesday morning.

UFC Fight Night Hamburg will come from the Barclaycard Arena in Hamburg, Germany and will be headlined by a heavyweight bout as Andrei Arlovski meets Josh Barnett.

Sobotta (15-5-1) is coming off a lost against Kyle Noke in November and the defeat snapped an eight fight unbeaten streak. Since coming back to the UFC, he is 2-1 and one of those victories came by submission against Steve Kennedy. Dalby (14-1-1) will also enter this fight following a defeat as he lost to Zak Cummings in April. He is 1-1-1 in the UFC and all of his fights in the promotion have gone the distance.