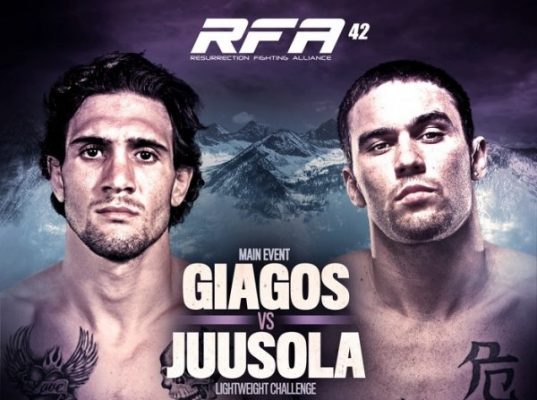 The fight booking was announced by RFA President Ed Soares in a press release on Monday evening and along with announcing the main event, Soares announced the co-main event will be a flyweight bout as Ray Elizalde will meet Alex Perez.

“I am excited to bring the RFA to central California,” stated Soares. “The main event of RFA 42 features two lightweights that have fought for our title. Christos Giagos and Zach Juusola are action fighters that are both looking to get another shot at RFA gold. I’m looking forward to this headliner and our first trip to Visalia.”

Giagos (12-5) is coming off a TKO win against Karen Darabedyan at RFA 38 last month and the victory snapped a two fight losing streak. He is 6-3 in his last nine fights and all of those victories have come by stoppage. Juusola (11-3) will also enter this fight following a victory as he defeated Robert Rojas Jr. by unanimous decision at RFA 30 last year. He is 3-1 in his last four fights and his only defeat in his last four fights came against Mehdi Baghdad at RFA 21 in a title fight.

Tickets for RFA 42: Giagos vs. Juusola are now available for purchase through VisaliaTix.com and the complete fight card will be announced shortly by the promotion.