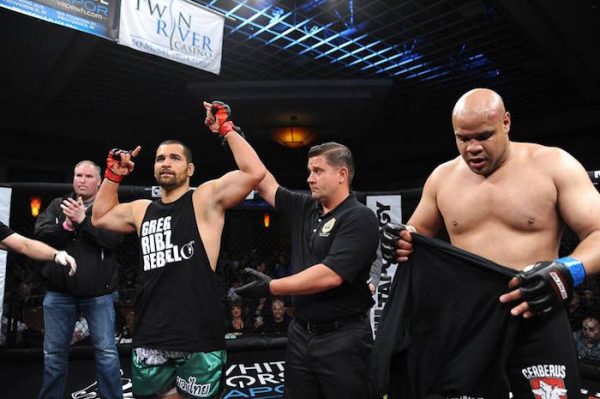 The vacant CES MMA heavyweight title will be on the line next month in Lincoln, Rhode Island as Greg Rebello will look for his fifth win in a row when he meets Ashley Gooch on the fight card coming from the Twin River Casino.

Rebello (20-6) is coming off a TKO win against Keith Bell at CES MMA 33 in March and two month prior to that fight, Gooch defeated Josh Diekmann by submission in the first round at CES MMA 32. When CES MMA initially announced this fight, Rebello stated that Gooch has never fought anyone like him and Gooch countered by stating that Rebello has never fought anyone of his caliber.

During the past Wednesday’s edition of “The MMA Report Podcast,” Rebello was asked about Gooch’s comments in the press release announcing there fight and explained how the comments made by his upcoming opponent are just not true.

“Well that is definitely not true,” Rebello said. “I have definitely fought guys that are better than him. He hasn’t fought anybody that is even close to me. His last win, he fought Josh Diekmann, who was coming off double knee surgery. Barely trained for that fight. I know that for a fact. But Josh is one of those guys who won’t pull out of the fight. Granted he beat Josh. He did a good job with that. The fights before that, he had not fought anybody. I would run through all of those guys that he fought, but that doesn’t mean anything. Every fight is different. Whatever makes him confident in the fight is cool with me, but he definitely hasn’t fought anyone like me. I definitely know that for sure.”

Check out Rebello’s complete interview from Wednesday’s edition of “The MMA Report Podcast” below and be sure to subscribe to the show on iTunes and Stitcher.