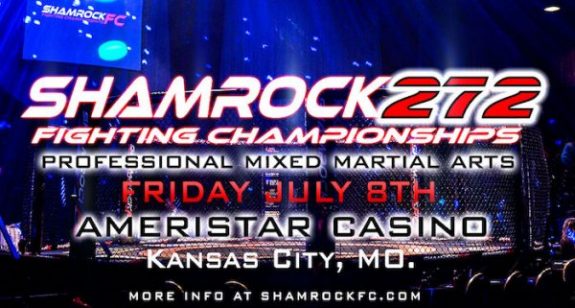 The main event of tonight’s Shamrock FC 272 in Kansas City will be a flyweight bout as Sharky Slyter drops down to the 125 pound division to meet Kendrick Latchman on the fight card coming from the Ameristar Casino.

Slyter (2-1) made his professional debut late last year and enters this fight following a decision win against Bryan Timmons at Victory FC 50 in May. While tonight will mark his 125 pound debut, he stated on Wednesday’s “The MMA Report Podcast” that he is open to taking fights at other weight classes.

“I always believe I would be able to make 125,” Slyter said. “Since I started, I did not see any reason in the ammy’s to cut all of that weight. I was just trying to get better and I have taken fights up to get a better fight. I just want the best fight possible. I would like to stay at 125 but I am not opposed to fighting someone really tough at another weight class. I just want tough people and I want to get better. That’s it.”

Check out Slyter’s complete interview from Wednesday’s edition of “The MMA Report Podcast” below and be sure to subscribe to the show on iTunes and Stitcher.