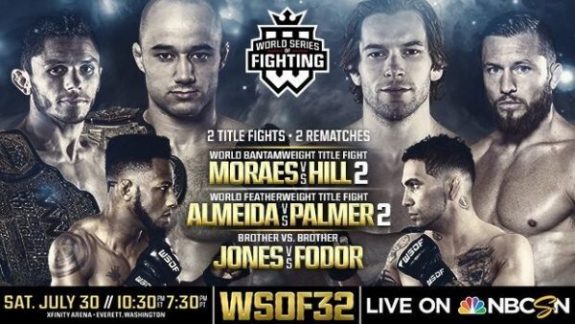 Tonight’s WSOF 32 main card will see an interesting matchup in the middleweight division as Louis Taylor will look for his sixth win in a row when he meets undefeated prospect Phil Hawes on the fight card coming from the Xfinity Arena on Everett, Washington.

Taylor (12-3) was initially scheduled to meet Shamil Gamzatov on this fight card, but Gamzatov pulled out of the fight and Hawes took the fight against Taylor. This will mark the second WSOF fight for Taylor as he defeated Cory Devela by submission in 29-seconds at WSOF 29 in March.

When you look at Taylor’s Sherdog profile, you will see that his nickname is “Put the Guns Down.” So what is the origin of Taylor’s nickname?

“Put the Guns Down is a movement that the urban community, south side, west side of Chicago and east side as well have been trying to get some of these young knuckleheads to understand that it’s not always about picking up the gun,” Taylor explained on The MMA Report Podcast. “Put it down. Every month, every week — someone I know or someone I know that knows is in the news for being killed by gun violence. And now gun violence has really taken a bigger stage amongst the world, but Chicago is probably the leading place for gun violence.”

“We do numbers in a weekend that most cities do in a month. It’s something I grew up under with and accepting,” he continued. “But I am an adult now and I want to raise my kids, friends, cousins, nephews and their friends to put the guns down. It’s not worth picking it up and pulling that trigger. I rather you go fight it out like a man or walk away. Find some another solution.”

Check out Taylor’s complete interview from Wednesday’s edition of “The MMA Report Podcast” below and be sure to subscribe to the show on iTunes and Stitcher.