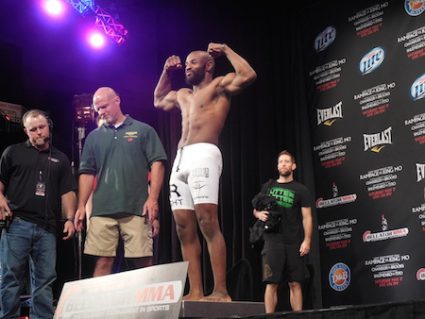 After being on the sidelines for 21 months, Nate Jolly is anxious to return on Saturday at Valor Fights 36

The man known as “Ladies Love” will return to competition for the first time in 21 months on Saturday night at Valor Fights 36 as Nate Jolly will meet Craig Johnson on the fight card coming from the Gatlinburg Convention Center in Gatlinburg, Tennessee.

Jolly (13-7) enters this fight following back to back defeats in Bellator and his most recent defeat came in October of 2014 as he lost a decision against Aaron Derrow. When he steps into the Valor Fights cage on Saturday night, it will have been 659 days from his last fight and he recently explained to The MMA Report what has been going on with him since his last fight.

“I was not happy with the performance in my last fight. I lost the decision. A part of me feels like I did not lose that fight,” Jolly said. “I felt like I got more takedowns, showed more control and got to center more. But judges are judges and not all of them are good. After that, I was supposed to have another fight with Bellator. They did not tell me the fight was not going to happen. I hit them up a couple of months later. I am kind of fat right now, you kind of want to give me a little bit of notice before you go calling me up or something because the first fight I had with them was on very short notice.”

“Rich Chou messaged me back and said we are not going to honor that third one,” he continued. “It’s not going to work out for us. I was like that’s cool. At least you know, you could have told me. I am paraphrasing here but essentially he said it’s been really busy. I don’t want you to think we forgot about you. So a little bit of time wasted there. Can be hard to get a fight locally. Definitely been frustrated, but anxious to get back in there. I think this is the right opponent at the right time. I definitely had some offers that were just not going to be right for me. Guys that are 6’4, on seven fight win streaks and things like that didn’t make sense. But I think this is a fight that makes sense. We are both coming off long layoffs and wrestler. I think that the fans both want to see us back in the cage.”

Check out Jolly’s complete interview with The MMA Report below.