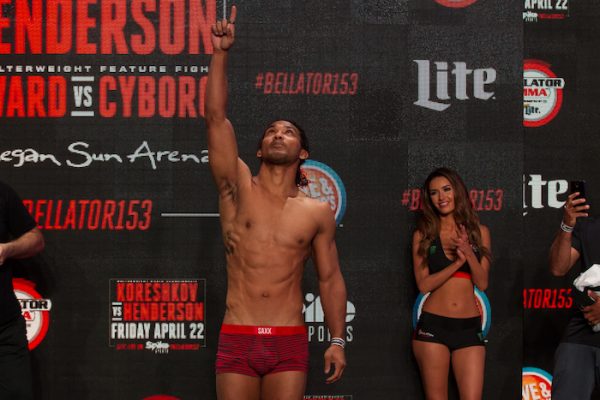 Bellator 160 will take place on tomorrow night at the Honda Center in Anaheim, California and will be headlined by a title eliminator fight in the lightweight division as former UFC lightweight champion Benson Henderson meets former Bellator featherweight champion Patricio “Pitbull” Freire.

The co-main event of the fight card will also be a lightweight bout as Saad Awad will look to put himself on the 155 pound title picture when he meets Derek Anderson, and Bubba Jenkins will look to even up the score against Georgi Karakhanyan in a featherweight rematch.

Check out a breakdown of the fights that will be on the main card broadcast on Spike.

Benson Henderson (23-6) vs. Patricio “Pitbull” Freire (25-3)
Henderson made his Bellator debut earlier this year against welterweight champion Andrey Koreshkov and was defeated by unanimous decision. The defeat snapped a two fight winning streak and this will be his first fight at lightweight since losing to Donald Cerrone at UFC Fight Night 59 in early 2015.

Pitbull is moving up in weight to face Henderson in a number one contender fight in the lightweight division and he is coming off a submission win against Henry Corrales at Bellator 153. He is 8-1 in his last nine fights and his last three wins have come by stoppage.

Saad Awad (19-7) vs. Derek Anderson (13-2, 1NC)
Awad returns to the lightweight division after taking a short notice welterweight fight against Evangelista “Cyborg” Santos earlier this year, which he won by TKO in the first round. It was his fourth win in his last five fights and two of those victories have come by TKO in the opening round.

Just like Awad, Anderson enters this fight following a victory as he scored a split decision win over Patricky “Pitbull” Freire at Bellator 147 last year. He has alternated wins and losses in this last five fights and he will be looking for back to back victories for the first time since 2014.

Bubba Jenkins (11-2) vs. Georgi Karakhanyan (24-6-1)
Jenkins has won three in a row since losing to Karakhanyan at Bellator 132 and is coming off a decision win against Goiti Yamauchi at Bellator 151. Three of his last four wins have come by decision and he is 8-2 in Bellator.

Karakhanyan enters this fight with back to back defeats and is 1-3 in his last four fights. His most recent defeat came in May at Bellator 155 as he lost a decision against former Bellator featherweight champion Pat Curran.

A.J. McKee (4-0) vs. Cody Walker (8-4)
McKee made his professional debut last year and all of his professional fights have take place in Bellator. His most recent win came in April as he defeated Danilo Belluardo by TKO at Bellator 152.

Walker took this fight on short notice and this will be his third fight in Bellator. He has gone 1-1 in the promotion and he enters this fight following a decision defeat in June at Legacy FC 56 against J.C. Cottrell.